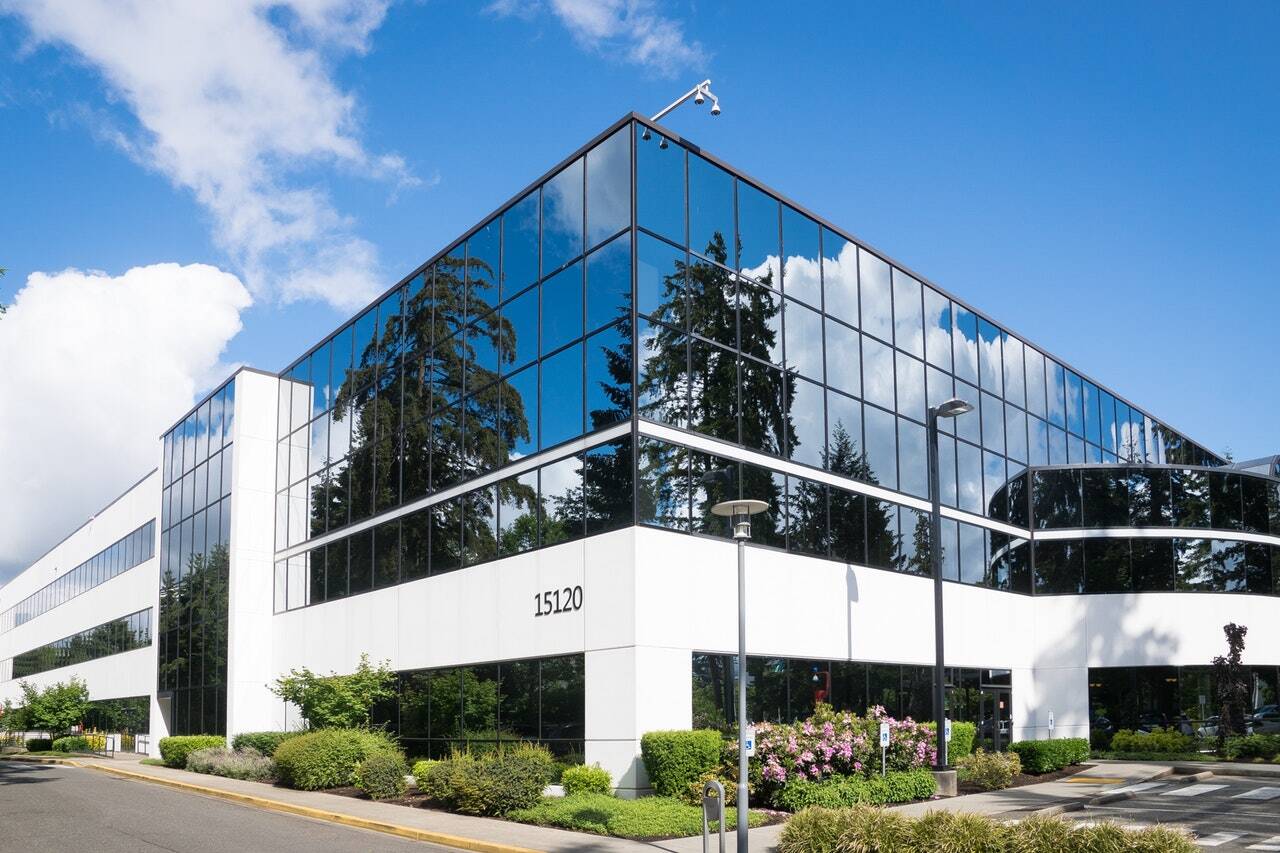 From Coffee Houses To Cubicles: The Evolution Of The Office

This article is brought to you in collaboration with British Gas business.

You might think that that the office is a relatively modern invention, cramming everyone into a single building on the premise that it makes us more productive and is cost effective, but if we look into the history of the modern workplace it can actually be traced all the way back to the East India Company which was founded in 1600.

The size and scope of The East India Company’s operation meant that there was a great deal of bureaucracy, from tracking imports and sales to running its own army (by 1803 they had a force of 260,000 soldiers!), there was a lot of paperwork to be completed and using the business system of the time – meeting in homes, coffee shops and a pub called “The Nags Head” – wasn’t feasible any more so the company moved in their first dedicated office, East India House, in Leadenhall Street in 1648.

As the Industrial Revolution took hold and the scale of manufacturing grew during the 1700s this led to a boom in office staff and the problems that went with it, in fact one worker threw himself out of a window in early 1800. These days we would recognise workplace stress and burnout but back then workers who exhibited these symptoms were classed as “mentally deranged” and shipped off to one of the company’s own asylums.

While mental health wasn’t high on a company’s agenda back in the 1800s, growth and increasing profit were and anything that could help the company make more money through efficiency was brought in. These items included Sellotape, the ballpoint pen and the typewriter, and it was the latter that began the technological revolution of the office in earnest.

The Impact Of The Typewriter

With the use of typewriter becoming more widespread from the 1870s this led to a big change in the way offices worked. 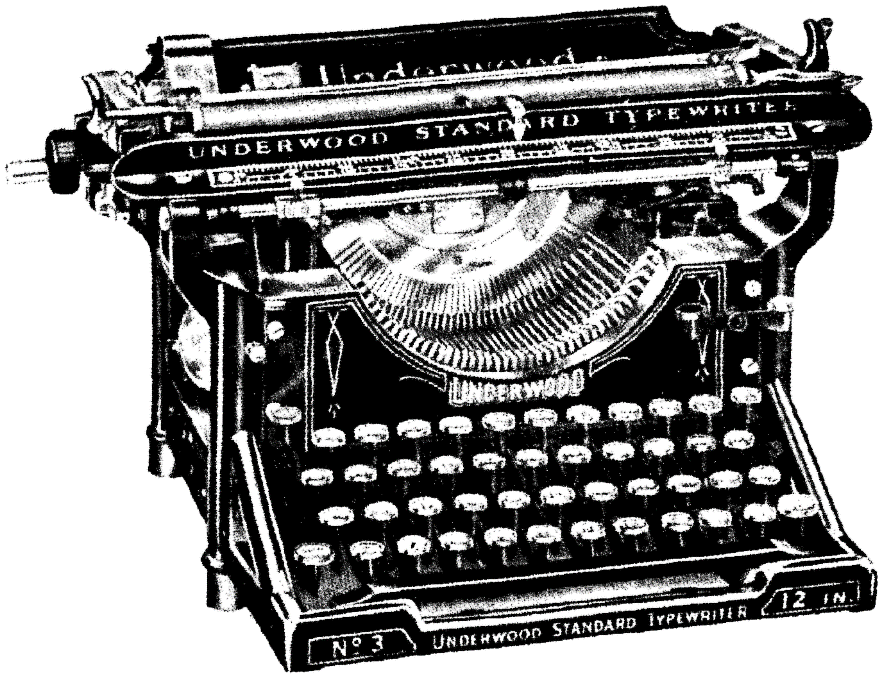 Documents could now be produced in a standardised format, and it didn’t matter what your handwriting looked like. Typing was also a lot faster than the traditional method of hand-copying any correspondence, in fact one organisation reported a 150% increase in the number of messages processed after the introduction of the typewriter.

Organisations were now able to make multiple copies of documents through the use of carbon paper – which was surprisingly invented all the way back in 1806 – which again saved countless hours of rewriting documentation.

But the biggest impact of the typewriter had to be that it brought women into the office as secretaries for the first time, with the workforce increasing from around 1,000 in the 1870s to over 125,000 in 1911.

Eager to make sure that they were making as much profit as possible, office mangers began to organise Time And Motion Studies to see where staff were being inefficient and savings could be made.

The study found that office workers were less efficient when their managers weren’t around and the current system of private offices made it difficult for a supervisor to keep an eye on all of the employees. The study lead to the birth of the Open Plan office – spurred on even faster by tax breaks for large office spaces in the US. 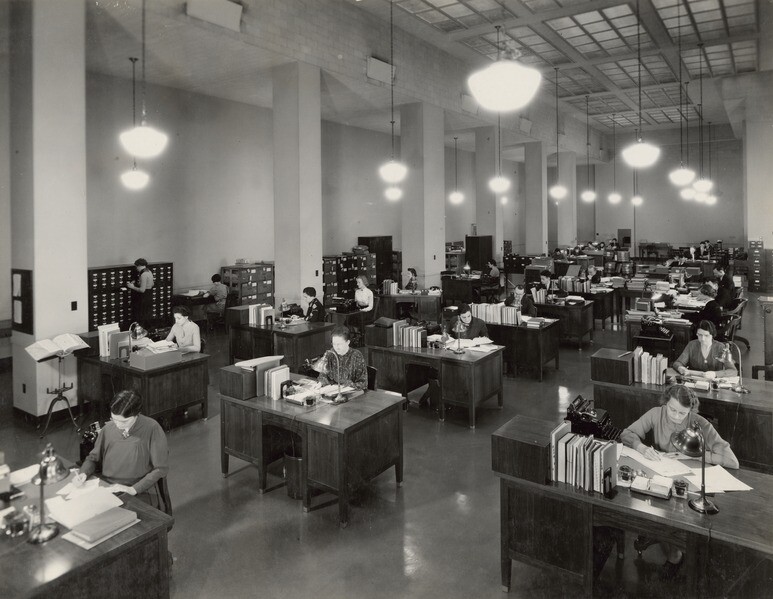 The introduction of an open plan office format also meant that furniture had to evolve as well and this led to the design of the “Modern Efficiency Desk” – instead of the standard sloping “scribe” type desks with separate storage, the efficiency desk comprised of a flat top with its own drawers for storage. The design also meant that supervisors had a good view of all workers at once and could ensure that everyone was working at maximum efficiency.

In the 1960s, the traditional open plan office was still in widespread use. As telephones became more common on each desk, and offices were increasing in size, distractions and noise were becoming an increasing problem; the design was now hampering efficiency rather than increasing it. 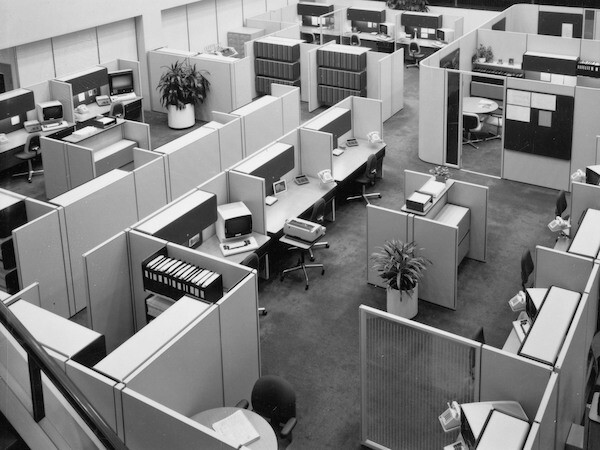 It wasn’t financially feasible to re-build the long-lost office walls both on a cost and efficiency basis and after years of study in 1968 The Herman Miller Research Corporation introduced their Action Storage System which was a set of components that could be joined together in various configurations to give employees their own workspace and privacy – and interestingly also had the capabilities of changing the height of the desk so it could be used standing, something that was way ahead of its time.

The dreaded cubicle had been invented, and it flopped.

This is surprising when you consider how ubiquitous the cubicle was during the 1980s to early 2000s but a lot of it was down to cost. Open plan offices where cheap to maintain and in companies that were driven by cost savings, they weren’t about to purchase an unproven and expensive office system.

The Herman Miller company went back to the drawing board and came up with the Action Storage System 2 which was a more pared back version of their original design losing some key featured such as the standing desk component and people loved it, turning open plan offices into cubicle farms.

The Rise Of The Machines

From the 1970s, technology started to become more affordable and began to move into the office. Efficiency was increased once again with the arrival of video conferencing, personal computers and high-quality printers.

Throughout the 1980s, as technology improved and we no longer needed huge secretarial pools or accounting departments, offices began to decrease in size and more people were crammed into each cubicle area to make the most of the smaller space and allow for savings on office costs.

With wide adoption of ISDN and Internet lines in the mid-to-late 1990s workers could now be placed in multiple locations and not all crammed into one “super” office. This allowed for lower property costs and helped workers become more efficient as they could now send a quick email or fax rather than having to organise a face-to-face meeting with their co-workers.

Technology became mobile and this had a massive impact on the office landscape. Laptops meant that workers no longer needed a dedicated desk to hold their computers so many companies operated a hot desking policy where an employee would just sit at any available desk – all personalisation of your cubicle was now gone and it was a case of first-come-first served when it came to grabbing the best desk in the office.

The Evolution Of The Office Desk

After businesses got over the threat of the millennium bug they realised that a new workforce could open up even more opportunities for efficiency and cost savings by allowing employees work remotely. This created a much larger pool of suitable candidates and meant that office sizes could be reduced even further, with some offices closing completely.

With the rise in remote working, this meant that a lot of companies didn’t have any designated spaces to hold meetings and this led to the development of coworking spaces where employees and companies can hire out an area for a short period of time without the overheads associated with having a permanent office space.

While having your employees work remotely is suitable for some business, there will always be professions that require their workers to journey to an office each day.

Over the past decade studies have been conducted and offices are now being tailored to individual company needs rather than using a “one cubicle fits all” policy. Interestingly, Hot Desking and Cubicles are now seen as a major hinderance to office productivity and a lot of companies are returning to the open plan office system of the 1800s and this could be causing issues that companies aren’t aware of.

A recent study found that face-to-face communication in open plan offices fell by as much as 70% with employees preferring email and instant messaging over a chat, 85% were unhappy with their workplace and 95% wanted a private area. This is a worrying statistic as an unhappy workforce costs the US between $450 and $550 Billion a year in lost productivity – that’s a huge amount for the sake of allowing an employee to work at home or have an office to call their own.

The Office Of The Future

While companies try to keep their workers happy with quirky additions such as the Slide in Google’s Zurich HQ or a bring your dog to work day, the physical environment is still the most important. So, what will the office of the future look like?

Companies such as Apple and Microsoft are increasing the use of green spaces in their new office buildings, providing gardens for people to relax in away from their desks. High street shops are encouraged to take up office space allowing workers to grab a Costa while waiting for their dry cleaning and natural light is a huge factor in modern office design – gone are flickering fluorescent lights, replaced instead by high ceilings and large windows.

Companies are also becoming increasingly aware of the importance of air quality and temperature on workers and are creating environments where this can be controlled at a micro-level so you no longer have to freeze just because a co-worker is having a hot flush.

Offices will also be more “agile”: workspaces will be flexible so a room can be used for meetings or a games room and there will be more breakout spaces featuring comfy chairs and TVs – employers will start to realise that allowing worker time away from their desks to relax isn’t shirking but can actually increase productivity.

Within the next few years we may also see a rise in the use of Virtual and Augmented reality to allow remote workers to interact with each other without the need to travel to an office or coworking space.

Whatever the future holds in terms of physical office space, employee wellbeing will now be high up on the list of company responsibilities and unlike the East India Company back in the 1800s, companies will realise that a healthy working environment is key to a happy, productive and motivated workforce.

About The Author
Katy is always trying to be more productive one day at a time! Whether it's analogue, digital, motivational or psychological who'll try any system that will help her get things done and get organised. As well as running FlippingHeck.com, she also loves making music and reviewing things.
Featured Image: Office Building by Pixabay on Pexels.com
Please Note: This post may contain affiliate links. By clicking on these links you will not be charged any extra for purchasing goods and services from our preferred partners however flippingheck.com may receive financial compensation which contributes to the running of the site. For more information please read our Advertising & Affiliate Disclosure Policy
Filed Under:

« Bored Of Your Job?
Say Goodbye To The Slump »