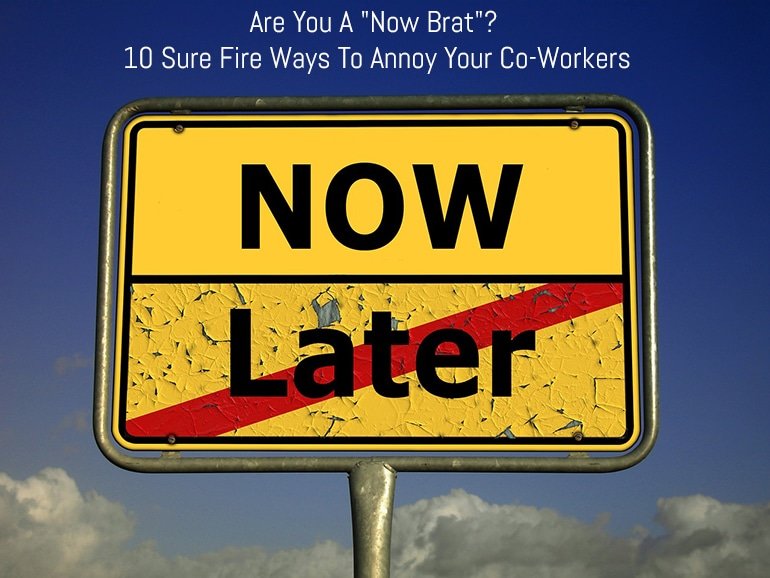 Are You A “Now Brat”? 10 Sure Fire Ways To Annoy Your Co-Workers

We’ve all had it; be it client, boss, co-worker or friend. They want it. And they want it NOW!

In this day and age of high-speed communication – instant messages, email, voicemail, fax, pagers…. and the rest – we are all (supposedly) instantly accessible all of the time.

Google, Yahoo! and the rest of the search engines have brought a wealth of knowledge a few clicks away. I can talk to my Auntie May in Australia over the Internet either in real-time thanks to Skype or by email at a time that’s convenient, download last night’s TV show that I missed or view an out of print book all thanks to the wonders of the internet.

We’ve become so used to the instantaneousness of everything that we want it when we want it, not necessarily when it’s convenient for others.

The problem is, in this day an age of super-fast almost light-speed communications, in business we expect an answer and we want it there and then and we won’t take “No” or “later” for an answer. That’s the definition of a “Now Brat”.

Now Brat: A person/organisation who wants something “there and then”; will not take “no”, “not now” “or “later”for an answer. Instantaneous delivery required

As out-sourcing and telecommuting have replaced the traditional  9-5 existence, we employ more and more tactics to get the answers sooner rather than later.

But surely there are reasons why we don’t get a reply from “Bob” 20 seconds after we sent that email? Of course there are but we seem, as a business culture, to be becoming less tolerant to that fact. After all, in the 21st century we are all customers (even within our own companies) and the customer is always right.

Just as a toddler stamps their feet in your local supermarket because you won’t buy the cereal with the Telletubby on the packet, a “Now Brat” will stomp their feet in many a strange way to grab your attention to try get what they want, when they want.

The “Now Brat” culture is rising and gaining more and more impetus as we all fall on to the band wagon and join in with the rest. So how do we avoid becoming something that we all (and admit it, you do hate it) despise and try to ignore?

Well, as they say, the first step to recovery is admitting you have a problem. See if you recognise yourself in any of  the situations below – either as the cause or the instigator!

Tactics of the “Now Brat”:

This is meant to be a slightly tongue-in-cheek post (if you hadn’t noticed) but I personally have come across all 10 examples in the past 12 months, I’m sure there are more… any one have any comments? Or anyone want to dare admit to being a “Now Brat“?

The one thing I’ll leave you with is a quote from my dear Mum (who could have made a fortune management consulting with her no-nonsense advice)…. “Always remember I want doesn’t get”.

It pays to be polite and ask…

About The Author
Katy is always trying to be more productive one day at a time! Whether it's analogue, digital, motivational or psychological who'll try any system that will help her get things done and get organised. As well as running FlippingHeck.com, she also loves making music and reviewing things.
Featured Image: Now/Later Town sign by geralt on Pixabay.com
Please Note: This post may contain affiliate links. By clicking on these links you will not be charged any extra for purchasing goods and services from our preferred partners however flippingheck.com may receive financial compensation which contributes to the running of the site. For more information please read our Advertising & Affiliate Disclosure Policy
Filed Under: