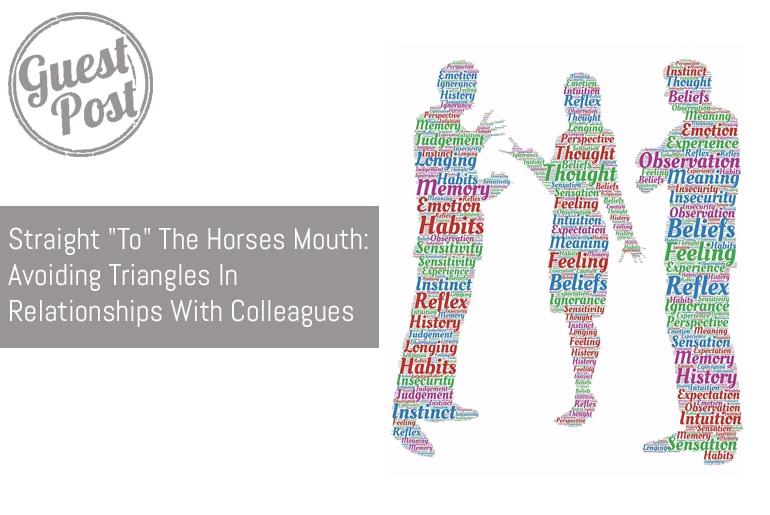 Straight "To" The Horses Mouth: Avoiding Triangles In Relationships With Colleagues

It may come as a surprise to most people who consider themselves hardworking professionals, to learn that we are neurologically programmed to play one of the three roles in “the drama triangle”. What is the latter, you may ask? It is nothing more than the way that human beings tend to behave when conflict arises. In a typical triangle, the three roles include:

As a member of a team, you may have played all these roles during the entirety of your career. Most often, however, people tend to get stuck in one of these roles. Based on early experiences and their conflict styles, people may feel more comfortable, for instance, in the victim role, preferring to load their frustration onto a third party, another colleague, or even their manager. These preferences can be difficult to let go, yet it is vital both to recognise they exist, and to cease forming part of a drama triangle, if true conflict resolution is to be achieved.

It is important to go straight to the person who may have caused you grief, instead of a rescuer, for various reasons. Firstly, by badmouthing the persecutor to the rescuer, you are effectively strengthening your bond with the rescuer, yet putting the latter’s relationship with the persecutor, at risk. Play is unfair, so to speak, because the rescuer will often only hear your side of the story. Of course, it is not only the victim who has to take a more assertive role; every worker should also be wary that they are not behaving as persecutors. Examples of persecutory action include making snide remarks about a colleague’s performance, excluding one colleague from simple activities such as a coffee break or drink after work, gossiping, and rudeness.

Body language can amount to persecution – have your closer colleagues jested about your moodiness or the way you request things from others? Take these comments seriously, since they could be a gentle way of providing feedback about behaviour colleagues are unhappy with. It takes honesty to admit you are part of a triangle though usually, there are many signs that this is the case. For instance, you may spend a great deal of your day complaining to another colleague about another workmate (via Facebook or phone message perhaps) or you may find that you are constantly consoling a colleague about somebody else’s behaviour.

Ask yourself if you are taking part in a triangle and try to put an end to it by first distancing yourself from the situation and planning necessary changes. If you are a victim, for instance, consider broaching the subject with the persecutor, asking them to address you in a kinder manner. If you are the rescuer, suggest that your colleague go straight to the persecutor the next time conflict ensues. Cut toxic conversations short or even tell the victim that you feel that the issue should be solved between the two parties concerned. Avoid becoming an enabler; often, work events can spill over into workers’ lives. Stress-related conditions such as anxiety, depression and even substance abuse can stem from unresolved conflicts at work. If you find that your victimized colleague is breaking down or indulging in unhealthy pursuits because of work conflict, encourage them to get professional help. Do not excuse self-destructive or evasive behaviour, which will only consolidate your friend’s role as a victim.

Be prepared for initial disappointment. Imagine that you ask a persecutor to stop making insulting jokes or to request a favour in a more respectful way. They may not respond as you like; it may take time before they realise their behaviour is backfiring, maybe because you stop responding to their requests until they treat you in a respectful manner. The focus should ultimately be on changing something you are doing, rather than on changing what the persecutor is doing. The same thing can be said if your bugbear is the office victim. If you consistently treat them kindly and in an inclusive manner, they will probably stop feeling the need to vent with colleagues – and even if they don’t, your professionalism will go a long way towards boosting team morale and ending the kind of imbalance which can result when each player in a triangle refuses to break this unhealthy structure.

About The Author
Ann is a 30-year-old mother of two who specialises in all things to do with health. She spent a decade working in human resources in the health sector before dedicating herself full-time to writing.
Featured Image: Conflict, disagreement, discussion by JohnHain on Pixabay
Please Note: This post may contain affiliate links. By clicking on these links you will not be charged any extra for purchasing goods and services from our preferred partners however flippingheck.com may receive financial compensation which contributes to the running of the site. For more information please read our Advertising & Affiliate Disclosure Policy
Filed Under: