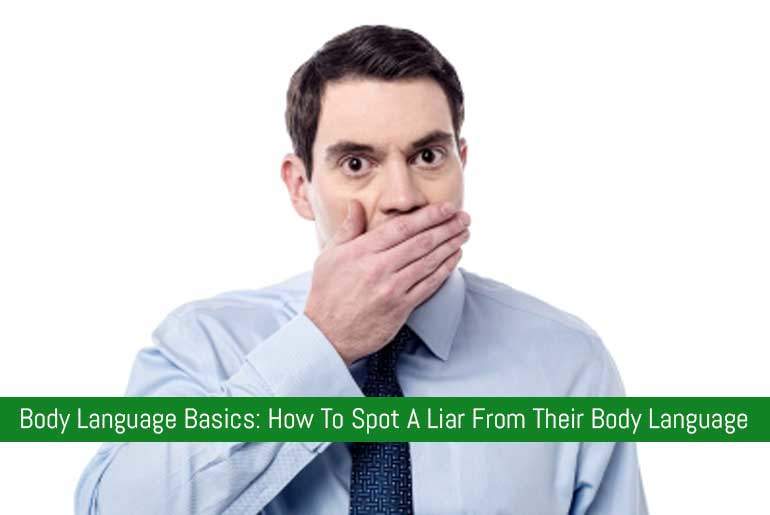 I first covered lying on this blog in a post called “9 ways to spot a liar” back in 2007 – yes, I have been rambling on for that long!. Even though I’ve already covered the subject I thought as we were covering Body Language I’d revisit the topic of liars and how you can spot if they’re being untruthful.

“Lying” is a bit of a strong word I think, sometimes people may bend the facts to fit the people they’re with or the situations they’re in; on occasion people may not even be away they’re stretching or being economical with the truth so if you spot someone exhibiting any of the signs below please give them the benefit of the doubt before you start throwing accusations around – short of a lie detector test on Jeremy Kyle show it’s your word against theirs so use these tips as a guide to put you on your guard rather than assigning blame.

Anyway, now that we’ve got the “disclaimer” out of the way let’s get on with how we can tell if someone is telling “Porky Pies”

Whilst some people may find it difficult to make eye contact the shifty-eyed person does everything they can to avoid looking at you. From looking at their feet to the more obvious shielding eyes behind a hand or dark glasses. An honest person will at least look at your face (or in your general direction) once every few seconds.

As well as avoiding eye contact there are other things the eyes do that can indicate lying. Weirdly, too much eye contact can also be a sign of lying. Maintaing eye contact can be very disconcerting and the person in question may be trying to intimidate you. This stare will have quite an unnatural quality to it though (such as limited blinking) so it should be quite easy to spot.

As well as staring, as I mentioned above limited blinking is also an indicator of being untruthful. This would require you to have an idea of how often the person in question blinks normally so that you can notice the difference. The lack of blinking is down to “over-loading” your brain: you’re basically concentrating on the lie you’re telling which confuses your autonomic functions.

Pupil dilation may also play an important indicator in whether someone is telling the truth. As the brain is working overtime trying to come up with or remember the lie the pupils will enlarge as brain activity an blood flow increase while and answer is being come up with.

Finally, where they look is as important as the other factors listed above. If they’re looking up and to the left then this is an indication of lying, looking up and to the right is a sign of recall. Looking to the left is an indicator of accessing the logical brain in order to come up with a response while looking to the right shows you’re accessing your memories.

If you notice feet tapping or, if their legs are crossed, their leg jiggling this is because they’re subconsciously running away from the situation they’re in. Of course, “jiggly legs” may be a sign of nerves but if you’re in a reasonably comfortable situation it could be a sign that they are lying and don’t want to be there. Crossed legs are also a barrier signal and are used to stop you getting too close to them in order to protect their lies.

If someone touches their face a lot – particularly their mouth – it’s and indicator that they’re hiding something. They’re trying to hide the deceitful words coming out of their mouths.

Okay, so excessive sweating may be a sign of supreme nerves (or the fact that your air conditioning has stopped working) but it may also be a sign that someone is spinning a few yarns: it’s one of the subconscious tells that we can’t really control no matter how hard we try.

Watch out for the person you’re talking to nod or shake their head at an incongruent moment. Our brains will subconsciously force our body to show how we really feel so if we’re lying then we may shake our heads when in in fact what we’re saying would require a nod. Additionally nodding (or shaking) the head too much may also indicate that a person is lying – through their excessive nodding they’re trying to convince you to agree with them.

When you’re under stressful situations you’ll use more water stored in your body through perspiration. This will cause your mouth to dry out so you’ll be licking your lips more frequently, this will then cause you to cover your mouth more often as mentioned above so it’s all a vicious circle really!

If they’re not crossing their legs then they may out other barriers in place such as crossed arms or even holding a coffee cup in front of them. Now, I’m not saying this is 100% proof that they’re being untruthful but if you look at what you are discussing and the situation you’re in it may be an indicator of truthfulness.

Again, this may be a sign of nerves but it can be a sign that someone is lying. As they’re telling the lie their heart rate will increase which requires the body to use more oxygen, this will then cause them to breath more heavily and rapidly. Check though that they aren’t nervous – or have a medical condition – so look at this tell in conjunction with other factors.

This section isn’t strictly about body language as such but it’s all part and parcel of telling if someone is lying. A person that’s lying will:

The above are are just indicators of whether someone may be being dishonest. There are many factors as to why people may exhibit any of these traits from nerves to even illness. Before you take any of these traits at face value try to establish a base line of how the person acts and reacts in a neutral situation. This is similar to the techniques used when administering lie detector tests – you need to figure out how the subject behaves under “normal” circumstances and then use this to establish how their responses vary based on the situation.

Is it obvious when someone is lying to you? Are there people who can get away with lying or does everyone have a tell? Let us know in the comments what you think is the biggest giveaway of a liar.

About The Author
Katy is always trying to be more productive one day at a time! Whether it's analogue, digital, motivational or psychological who'll try any system that will help her get things done and get organised. As well as running FlippingHeck.com, she also loves making music and reviewing things.
Featured Image by Stockimages from FreeDigitalPhotos.net
Please Note: This post may contain affiliate links. By clicking on these links you will not be charged any extra for purchasing goods and services from our preferred partners however flippingheck.com may receive financial compensation which contributes to the running of the site. For more information please read our Advertising & Affiliate Disclosure Policy
Filed Under: