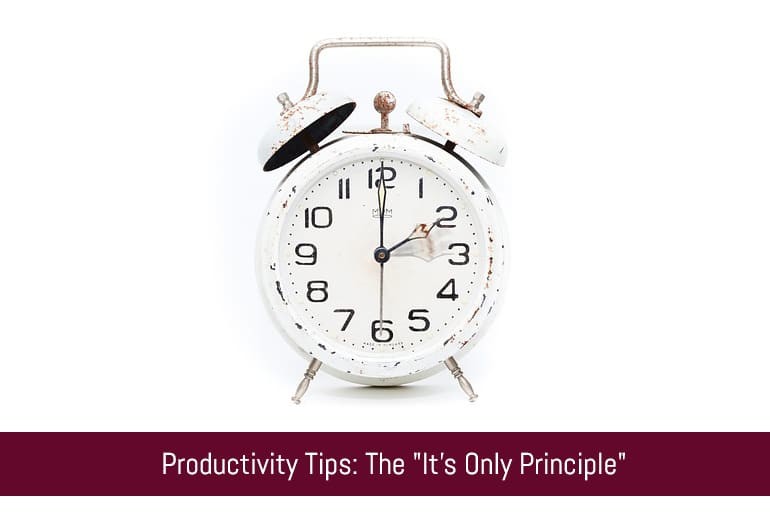 Productivity Tips: The "It's Only Principle"

How many times have you put off doing something because you thought “On, No!” about it? Quite a few I reckon.

The “Oh, No!” feeling may come from a variety of sources:

It may be one of the feelings above, a combination of them or something completely different that makes you think “Oh, No! I’m not going to do that!” which leads to procrastination and a whole host of missed opportunities.

How about I give you a personal example to show you what I mean?

For the past few years I’ve been suffering from a bad back – it’s reasonably okay now but every now and again I have a problem so after a bit of research I decided I should do some Pilates. I bought a couple of books but you know what it’s like when you try to exercise at home: you’re really enthusiastic in the first week, do slightly less in the second week and by the third week you’ve forgotten about it completely.

Not long after my failed attempt a friend of mine told be she attended a local Pilates class and invited me along.

“Oh, No!” A little voice inside me said, “You couldn’t possibly go! You’re really unfit, you wouldn’t know anyone, they’d all judge you, you’ll embarrass yourself.”

The list of negatives (and excuses) went on and I won’t bore you with them but I’m sure you get the picture.

Then, very quietly a little voice in my head spoke up and said “Pull yourself together Katy. For goodness sake it’s only an hour of your time.”

That made me stop and think, and then I had a ‘light bulb moment’.

“You’re absolutely right,” I thought to myself, “What will I lose if I go? An hour of my time but what I’ll gain if I go will certainly outweigh any loss.”

I now apply the “It’s Only Principle” to other areas of my life. If I’m not sure I really want to do an overtime shift at work I’ll say to myself “Katy, it’s only four hours” and if I think “Do you know what, you’re right” then I agree to do it.

If I’m unsure about going out somewhere I’ll apply the “It’s Only Principle” – “It’s only a couple of hours” I’ll say to myself and if I feel okay about spending that time on that activity (which I usually do) then I’ll go. On the odd occasion I don’t feel like taking part and the prospect of it only being “x” hours isn’t appealing because I have considered it I don’t feel bad about saying no.

How The It’s Only Principle Works

We’re often told we need to be looking at “The Bigger Picture” in order to make judgements on what course of action we will take. Sometimes though when we look at the big picture it’s really easy to get overwhelmed, this cab cause huge amounts of stress and anxiety and can put you off your task completely.

Using the “It’s Only Principle” we can take these big picture items and break them down into smaller and more manageable chunks of time or actions.

I’ve written in the past about how chunking tasks can be a real boost to productivity but let’s take a real-world example to show how we can use chunking along with the “It’s Only Principle”.

We could have a “Big Picture” task called “Build the ACME Website”. This big picture view is okay when we’re scheduling things in that will be worked on in a few months. When we get down to the “Build the ACME Website” project though, this definition is far too broad to be of any use to use so we break the task down into chunks such as:

Breaking this big project up into smaller chunks is a boost to productivity, but we can further boost our productivity levels by applying the “It’s Only Principle” to make it even easier for us to complete a task – especially when we’re not looking forward to completing a task or aren’t feeling that motivated. For example:

If something still seems quite big and off-putting you can break it down even further. If the “Quote For ACME website” was a bit more involved (perhaps you didn’t have a quote template to use, or it was a bit more complicated than a standard quote) we could break it down into more smaller “It’s Only” sections. For example if we determined the quoting process was going to take 5 hours in total, that seems like a really big chunk of time so we can break it down further:

So rather than seeing a massive 5 hour chunk of work the most you’ll see is a single hour for one task.

What The “It’s Only Principle” Can Be Used For

Don’t think that the “It’s Only Principle” is just for motivating you to spilt and manage tasks more productively, it’s also a fantastic motivational tool as well.

Take my earlier example about hesitating to join a (much needed) Pilates class. I could have said “No!” but instead I said “It’s only an hour” and off I went.

The “It’s Only Principle” is great for getting you over that initial hump of resistance that I’m sure we all feel when starting something new. We all go through that period where we loathe starting something but once we do finally get going we tend to feel a lot better about not only the activity but ourselves too.

Quite often once you start a task you will then continue on and work through others, you’ll then feel even more motivated.

Before you know it you’ll have checked off a load of items on your to-do list. Using the “It’s Only Principle” can get you started, and that small achievement will have a big effect on your productvity, motvation and general sense of Accomplishment.

This general sense of achievement will have a big impact on your mental health, making you feel better about yourself and more willing to start more things therefore creating a fantastic circle of motivation.

Whilst the “It’s Only Principle” may seem rather simplistic, I think that’s where its strength lies.

You can apply it to so many aspects of your life – whether that be getting started on a big project, starting a chore you’ve been putting off for ages, exercising, cooking a healthly meal rather than opting for take-out or even going to the cinemam it lends itself to be a motivating force across so many areas.

Don’t believe me? Give it a try. I’m sure you’ll be impressed with the results. Let us know your thoughts in the comments or by contacting me

About The Author
Katy is always trying to be more productive one day at a time! Whether it's analogue, digital, motivational or psychological who'll try any system that will help her get things done and get organised. As well as running FlippingHeck.com, she also loves making music and reviewing things.
Featured Image: Alarm Clock by PIRO4d on Pixabay
Please Note: This post may contain affiliate links. By clicking on these links you will not be charged any extra for purchasing goods and services from our preferred partners however flippingheck.com may receive financial compensation which contributes to the running of the site. For more information please read our Advertising & Affiliate Disclosure Policy
Filed Under: