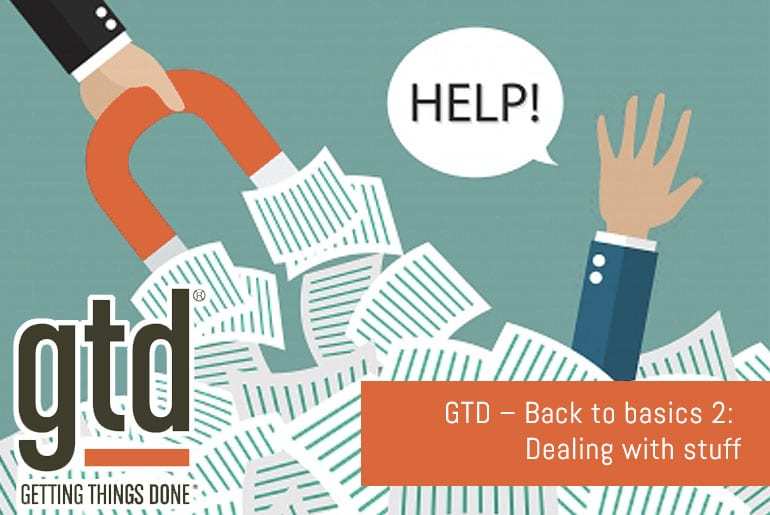 GTD – Back to basics 2 – Dealing with stuff

In the first part of the GTD: Back To Basics series, we looked at Collecting stuff. In this instalment, we’ll look at what do do with that stuff once you’ve collected it.

The first rule of processing stuff is:

If it’s going to take less than 2 minutes just do it!

Too often we put off the simplest of things just because we think it’ll take a long time when in fact it’s literally a 2 minute job. Whilst David Allen gives you the “2 minute rule”, I find that I get more done if I extend that to 5 minutes but it’s all a matter of personal preference. The Getting Things Done methodology isn’t set in stone and should be tweaked to fit in with you and the way you work.

So, what do you do with all of that stuff that you collected?

With physical stuff you need to look at what it is, what you want to do with it and whether you want to keep it.

If it’s a magazine for example, rip out the articles you want to read and file it in a box for “reading”, that way, next time you’re heading out to the doctors surgery instead of reading a magazine that’s 2 years old you can grab a magazine off the stack and take it with you.

For bills that need to be paid, or things that have to be done/used at a specific time (like replying to an invite or concert tickets for example) David Allen recommends setting up a tickler file. You can read more about a tickler files at here but the basic gist is you have 31 folders (1 for each day of the month) and anything that needs to be done that day gets put in the relevant folder.

If it’s stuff that’s in the wrong place then put it back where it belongs.

If it’s something that you need to do like replying to a letter, add it to your next action list or if it requires more than one action add it to your project list (see below).

If you don’t need it, like an out of date flyer, then bin it! It sounds silly but we always have so much stuff lying around that we don’t need.

The best way to sort mental stuff is to begin to arrange it into lists depending on what it is. These lists are:

Whatever you do, when you’re processing your stuff whether it be physical or mental, never out anything back in your collecting box! Process it into the right place or list otherwise you’ll never get anything done!

In the next part of the series, we’ll look at Contexts and Next Actions.

About The Author
Katy is always trying to be more productive one day at a time! Whether it's analogue, digital, motivational or psychological who'll try any system that will help her get things done and get organised. As well as running FlippingHeck.com, she also loves making music and reviewing things.
Featured Image: Businessman Holds Magnet by Sira Anamwong From FreeDigitalPhotos.net
Please Note: This post may contain affiliate links. By clicking on these links you will not be charged any extra for purchasing goods and services from our preferred partners however flippingheck.com may receive financial compensation which contributes to the running of the site. For more information please read our Advertising & Affiliate Disclosure Policy
Filed Under:

« GTD Back to basics 1 Collecting stuff
Are You In The Wrong Job? »