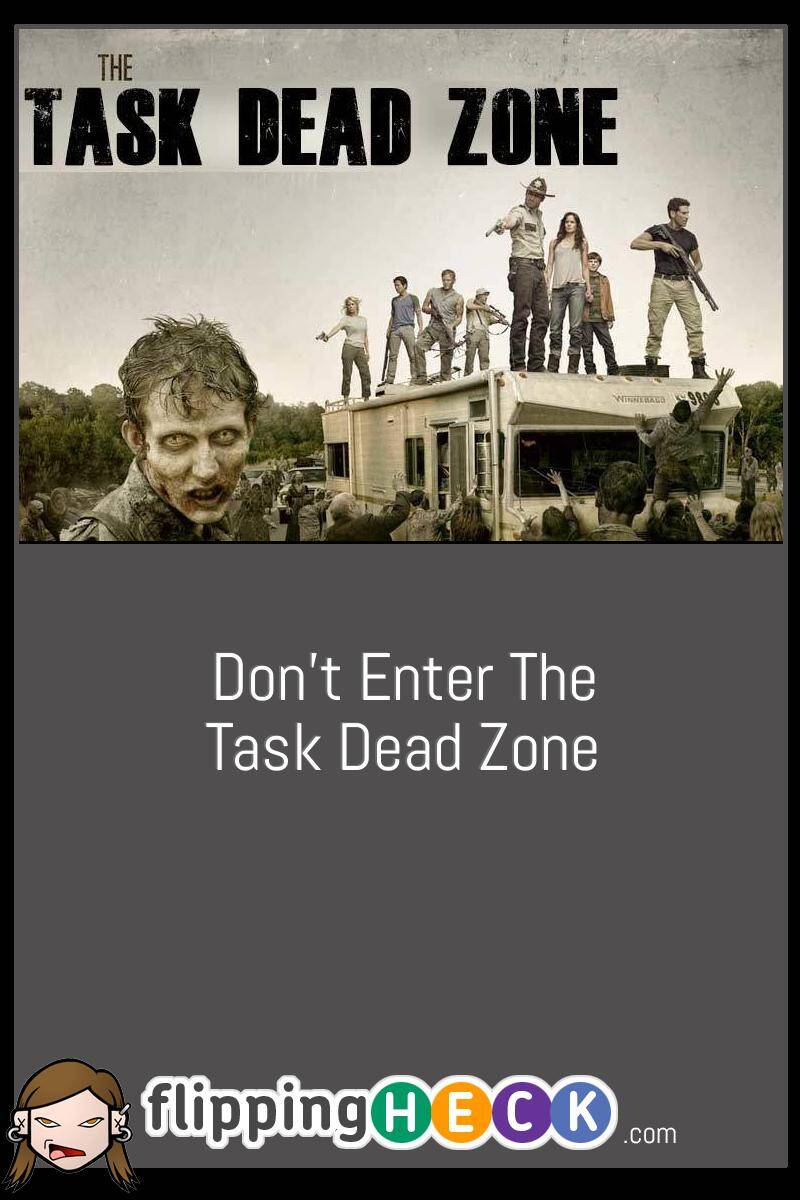 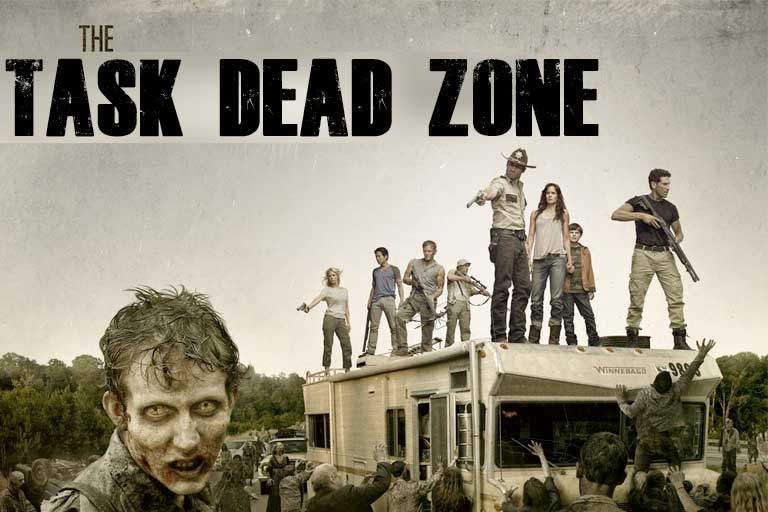 This website contains affiliate links. Purchasing items through these links won’t cost you anything but they will help me make a small amount of commission to help run my site. These links are marked with a *

I’m not talking about the “Dead Zone” as an episode of the Walking Dead (although that would be a cool title I think) but rather an area of time where nothing is done but could be filled by something useful no matter how insignificant that “something” seems.

There are plenty of studies out there that show that no-one can truly multi-task, and anyone who says they can are slightly delusional! I was fortunate enough to receive a press release copy a few years ago of Dave Crenshaw’s “The Myth of Multitasking: How ‘Doing it all’ gets nothing done“* and a lot of what he said in this short, but informative book struck a chord with me (read my review here) and I’ve been thinking about it ever since.

Recently, for some reason, I’ve been thinking a lot about filling dead time. By that I mean filling areas of activity that would otherwise be used by me to stand around looking like a gormless idiot. Dave Crenshaw calls this “Background Tasking” in his book and I couldn’t recall what it was named until I re-read it. That to me “background tasking” doesn’t sound nearly motivational enough so I now I refer to it as (Duh Duh Duuuuuuuuuh in a horror movie style with some echo) “The Dead Zone”.

What are you on about? What is Background Tasking?

… When you perform two or more tasks where only one of those tasks requires mental effort. Examples of background tasking could be eating dinner and watching T.V, or jogging and listening to music.

When we talk about multi-tasking, and saying how good we are at it, I think a lot of the time we’re confusing doing background tasks with actual “Task” tasks.

Multi-tasking in any way, shape or form costs us time, energy and mental alertness (Crenshaw calls this the Switching Cost) that could we otherwise channel elsewhere. He has a great example os switching costs in his book*, and a downloadable version on his website – try it and you’ll be surprised!

For example, I’m typing this article on a Word Processor called “Write Room” that gives me a complete distraction free environment, the T.V is off, I’ve (gasp!) turned my Wi-Fi off, and the only (minor) distraction I have is that one of my cats periodically wants a fuss or to sit (as cats do) on my laptop keyboard.

I have written all of this so far in around five minutes. Some may call that fast, some may call that slow. All I know is that if I had the T.V on in “the background”, or a browser open with Facebook, Twitter and Tumblr tabs open it’d probably taken me an hour to get to this paragraph thanks to my attention being split between tasks. Mentally I’d be saying to myself that I’m really concentrating on writing when in fact I was spending 30% of my time listening to the T.V and a further 30% reading my friends status updates.

Too often we feel like we’re being productive when, in actuality, all we’re doing is wasting precious time by attempting to do more than one thing, or switch our focus between multiple areas of concentration which end up costing us more time in the long run.

So What’s This “Dead Zone” Then?

I do take what Crenshaw says with a pinch of salt. I believe there are only certain times, tasks and situations that can be filled by a background task, but those that can and aren’t used appropriately become a “Dead Zone” of productivity.

Take for example waiting for the kettle to boil. I don’t know about you but I make a minimum of 3 cups of coffee or tea a day. In that time I flick through the newspaper either reading a short article or noting a long article I want to read later. That way, when I have 20 minutes to myself (and that could be to sit down waiting for a pan to boil or something else *ahem* ) I can flick to the articles that most interest me in the paper an ignore the rest of the rubbish.

Or, how about I know that my dinner is going to take 20 minutes in the oven? From my task list I can pick out 3 five minute tasks, or one slightly longer one and get that done rather than just sitting forlornly looking at the oven waiting for the timer to go ding.

I have to say I don’t expressly mark estimated times down on tasks (yet) but everyone should be able to give a rough guesstimate on how long it’ll take – and if you can’t then it may be a project which could itself be broken down into smaller task chunks which are time-able (more on this another day I think!).

I was reading something earlier today (which I’ll probably touch upon in a later post) about the theory that just getting started on something makes you more productive.

Spending two minutes on a task that is loosely associated with the main task that you’ve been procrastinating on can kick-start the process and make you super-productive.

Using the “Dead Zone” philosophy can really help you start getting things off the ground and running.

Take for example the other day when I had to come up with some ideas for one of my other websites (Badly Drawn Cartoons in case you were wondering!). I put the kettle on which acted as my 3 minute timer and just brainstormed. I came away with enough material for the next 2 months. If I’d have just sat with my coffee I’d have maybe got two weeks worth.

Isn’t that just some self-imposed timer?

Yes, well, maybe! The above example may not have been the best for describing how to fill the Dead Zone, maybe re-reading “The Myth of Multitasking: How ‘doing it all’ gets nothing done“* whilst on the toilet, or listening to “Graces Guide: The art of pretending to be a grown up“*  via Audible while cleaning the bathroom are better examples (note to readers: I do leave the toilet/bathroom occasionally to forage for food).

There are so many Dead Zones with in our day that if we could just utilise a couple of minutes each time we’d get so much done it’d be frightening!

I’ve started to use the following apps and tools to help me fill in any Dead Zones I come across:

Pocket – Save full articles to read later. I can pick and choose what to read based on the situation I’m in. I only have 5 minutes before an appointment? No problem! There’ll be an article I can read.

Feedly – A replacement for Google Reader which I used to live by. I do tend to subscribe to a lot of websites through Facebook but it’s quite easy to get sucked in to watching friend’s videos or clicking though to their Instagram feed. Feedly allows me to stay contained to the websites and news I want to read, although it can be easy to get sucked down the rabbit hole of wanting to read every update.

iTunes/Soundcloud/Spotify – Listen to music or podcasts whilst you’re on the go.

Catch-Up-TV – You don’t have to sit down in front of the T.V at a set time any more, D.V.R it or watch it online at a time to suit you.

A good old fashioned notepad and pen – I come up with a serious amount of ideas and while I’m sitting in a pub waiting for my go on the pool table, sometimes the act of physically writing something down can be very cathartic

Do you fill in Dead Zones, or do you just take the opportunity to zone out? If you like to fill the Dead Zone and Background Task, what do you get up to? Let us know in the comments!

« Can you wake up easier in the morning? Yes! (S...
Overwhelmed? Dont break down, break it down »