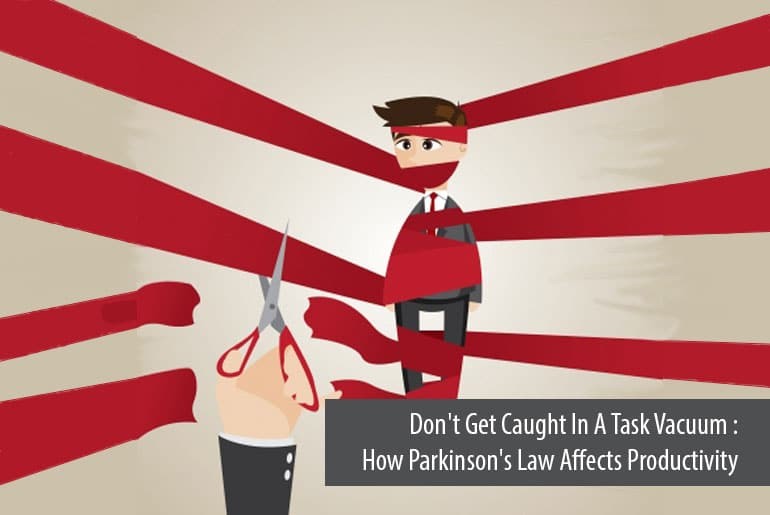 There’s a saying that “Nature abhors a vacuum”. Aristole, the Greek Philospopher, first noted back in the 300’s B.C that space is always filled with something even if that something is tiny and invisible like air. Fast-forward 2000-odd years later and the same principle is being applied to work and task managemnt.

In 1955, Cyril Parkinson wrote a satirical essay on his experiences working in the British Civil Service – an organisation known, both then and now, for it’s seemingly endless levels of petty bureacracy and red tape.

The first line of Parkinson’s essay: “Work expands so as to fill the time available for completion” stands as true now as it did in 1955.

Parkinson first took an interest in the mismanagement of time when he noticed that even though the British Empire was shrinking the service that managed it was rapidly growing. People were building their own little fifedoms and generating extra work in order to justify their existance.

Although the modern meaning of Parkinson’s Law relates to a mathmatical equation that works out the expansions of the type of Bueracracies Parkinson worked for, we still understand the meaning and sentiment behind the phrase “Parkinson’s Law.”

Parkinsons Law In The Real World

You may think that just because you don’t work for some faceless government buracracy you’re immune to the effects of Parkinson’s law but you’d be wrong.

Let’s say you are given a project at work that needs to be finished in one week. If you sat down and properly planned and proritised tasks it may only take you a couple of days to complete but, due to Parkinson’s law, you’ll find extra little tasks that don’t need to be done just then or spend ages on a minor point. Have you ever agonsised for hours over what font to put your report in? Yup, you’ve fallen into Parkinson’s trap.

You’ll dawdle over the minutest of deals because you know you have “ages” to complete the project and then end up rushing to finish your task as the time’s flown by and your deadline is fast approaching.

Parkinson’s law also states that we make tasks more complex the longer we have to complete them, if we have less time then we’ll do our best to simplify things so we can get them done within the given timeframe.

I’ve certainly seen this happen whilst working as a web developer, it’s known as “Feature Creep”. If you know that you have 3 months to build a website, you may decided to add lots of functionality that wasn’t in the original spec, or overcomplicate the functionality as you have more time. You may think that you’re improving or futuring proofing the website but what you’re doing is ignoring the work actually required, making life much more difficult for yourselves and introducing factors that could cause extra work (bugs etc.)

Deadlines give us a sense of urgency, but this urgency can be false and lead us to go about our tasks in an unorganised fashion, make mistakes and ultimately miss targets.

Whilst you may have a deadline of a week to complete something the true deadline is the actual real amount of time it will take you to complete the project as specified with no bells and whistles.

If you sit down and properly project manage your the project, proritising and delegating tasks as required you’ll soon see the true deadline – whether it is shorter or longer than the given deadline

Many of us don’t feel as though we’re putting in 100% effort if we’re not constantly doing something whether the task we’re doing is achieving a particular goal or is just “fluff”.

This “fake” work takes us away from other things that are more important that we should be concentrating on, it also stops us from relaxing and refreshing our minds.

We need to understand that not all tasks need doing, that some tasks are created and given to us in order just to keep us busy and justify our employment – hence the level of red tape when we try and get something from a Government Department (hello tax office, are you reading this?!)

How To Avoid Parkinson’s Law

Figure Out Your Deadlines Properly

Make sure you plan out your projects and work out task times so you can give yourself an accurate deadline rather than an arbitary one.

Don’t Make Extra Work For Yourself

Work only on the tasks required for the project at hand, don’t add any thing to it and unless really urgent don’t accept any work from others, ask if you can schedule it for after your project has finished

Use a technique such as TimeBoxing or The Pomodoro technique to help manage your time and tasks.

These techniques can help you stay on task and manage your time effectively, they’ll also aid your concentration.

If you’re stuck in a system with a set way of doing things, see if there’s a way you can alter the workflow or processes to better help you with getting your tasks finished in a timely fashion.

You may be stuck with set steps to take,but perhaps changing the order of the steps would make things more efficient.

Give Yourself A Temporary Fake Deadline

You can do things like working without your laptop charger so you have to complete a task before it dies, or going to a coffee shop instead of working in your office because you know you’ll get kicked out at a certain time. These small “fake” deadlines will help boost your productivity and concentrate your efforts on getting things finished.

Do you think Parkinson’s Law applies to modern so-called streamlined organisations? Do you have an example of it at work? Let use know in the comments, Send Me A Tweet or drop me an email.